Filming for the ARD documentary also took place at HGI. 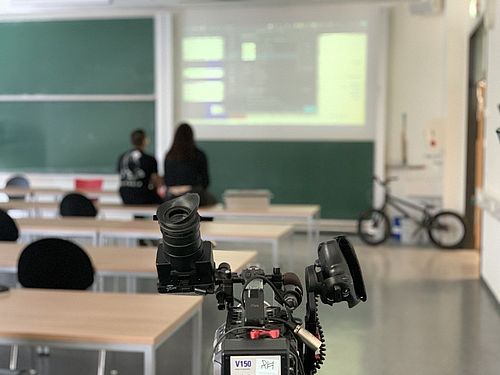 At the end of April, the Ruhr-Universität (RUB) was one of the filming locations - in compliance with Corona rules - for the documentary "China: Surveillance State or Future Laboratory?" by Mathias Bölinger, Tamara Anthony, Svea Eckert and Daniel Satra. Next Monday, May 31, at 10:50 p.m., it will be shown on ARD.

The documentary takes a critical look at how digital surveillance in China is being pushed ever further in all areas of life, and how the huge amounts of data collected are handled in the process. Who separates garbage incorrectly? Who lives alone? Who is not wearing the Corona mask correctly? Very little escapes cameras and apps.

The documentary examines the security and data protection aspects of such technologies and the impact on privacy with the help of Professor Thorsten Holz and Bedran Karakoc from the Chair for Systems Security, among others. It also accompanies RUB student Vinh, who is active on the social network TikTok.

To the media library