At the kick-off of the new lecture series of the Research Center Trustworthy Data Science and Security, the interdisciplinary research spectrum and future-oriented issues for an increasingly digital society were presented. 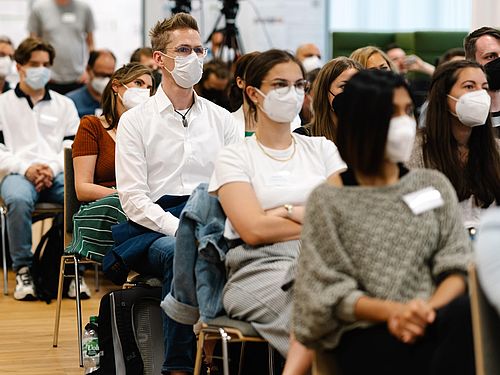 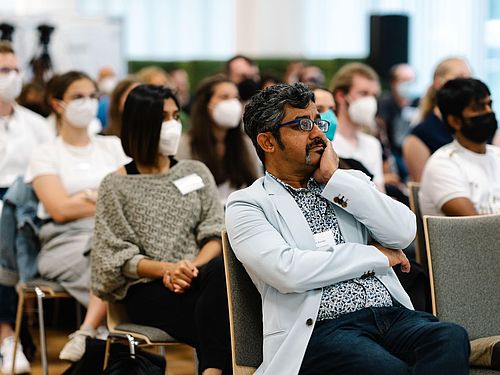 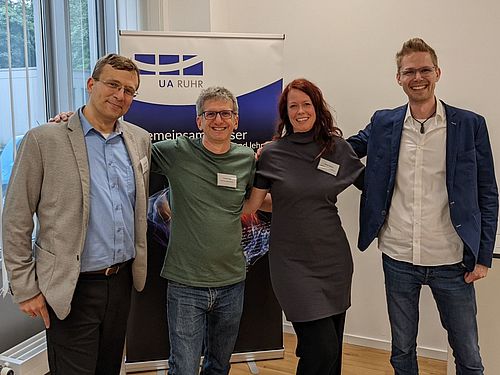 Whether it's surveillance at airports or the use of artificial intelligence (AI) in police operations: Rapid technological progress is driving the development of various intelligent systems, which, however, interfere with our privacy to varying degrees in their application. How to create and formally guarantee societal trust in digital technologies is the focus of research at the Research Center Trustworthy Data Science and Security, which was founded this year. On Monday, May 23, 2022, the lecture series's inaugural event took place on the campus of Ruhr- Universität Bochum (RUB).

Two of the founding directors of the Research Center, Prof. Dr. Nicole Krämer (University of Duisburg-Essen) and Prof. Dr. Emmanuel Müller (Technical University of Dortmund) welcomed interested young researchers in their opening keynote and presented the goals and content focus of the Research Center. "The use of the social scoring system in Shanghai is considered one of the most questionable examples of a society that is becoming increasingly digital, and is also an example of the tension between digital technology and social acceptance," said Prof. Krämer, describing the relevance of collaborative research between the disciplines of social sciences, data science and cybersecurity. Even if omnipresent surveillance and a state evaluation system like in China do not seem realistic in Europe, it is important to research how technical innovations can not only prevail but also meet with interest and acceptance among people. Prof. Müller added: "We don't want to accept new digital applications simply because they are technically possible, but research how we can empower people in general to understand, operate, but also regulate these technologies." At the same time, the Research Center aims to further develop intelligent systems to also create provable guarantees that support people's trust in digital technologies.

Prof. Dr. Krishna Gummadi from the Max Planck Institute for Software Systems could be engaged as speaker for the kick-off of the new lecture series. In his lecture, he addressed, among other topics, the question of how fair digital marketplaces can be developed and how artificial intelligence influences public discourse in social media. This was followed by a talk by Prof. Dr. Shyam Sundar from Penn State University, who spoke on the topic of "Trustworthy AI: Psychological Tensions between Humans and Machines." In a concluding poster session, the young researchers were able to contribute and share their own work.

Over the next three years, the Research Center will hire twelve additional professors and research groups. This will enable the Center to provide comprehensive answers to urgent future questions and further strengthen the interdisciplinarity and internationality of the University Alliance Ruhr.

About the Research Center Trustworthy
Since 2007, the Ruhr-Universität Bochum, the TU Dortmund University and the Universität Duisburg-Essen have been working closely together strategically under the roof of the UA Ruhr. By bundling forces, the services of the partner universities are systematically expanded. Under the motto "together better" there are now more than 100 cooperations in research, teaching and administration. With more than 120:000 students and almost 1:300 professors, the UA Ruhr is one of the largest and most powerful science locations in Germany. under the roof of the UA Ruhr, the research center "Trustworthy Data Science and Security" addresses the trustworthiness of intelligent systems, e.g., in safety-critical applications or in social media. The founding directors of the Research Center were announced: Prof. Dr. Nicole Krämer (University of Duisburg-Essen), Prof. Dr. Emmanuel Müller (Dortmund University of Technology), Prof. Dr. Christof Paar (Max Planck Institute for Security and Privacy and Ruhr University Bochum), Prof. Dr. Markus Pauly (Dortmund University of Technology).