He will give a lecture on “Simply Secure: Tools for Automated Generation and Evaluation of Protected Hardware”. 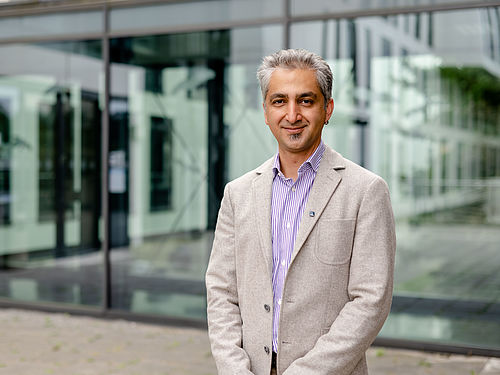 The Faculty of Computer Science cordially invites all interested parties to attend Prof. Amir Moradi's inaugural lecture “Simply Secure: Tools for Automated Generation and Evaluation of Protected Hardware”. Moradi is a newly appointed Professor of Implementation Security since August 2022, and his research is primarily focused on automated fabrication of protected hardware and software designs. His research topics include Implementation Security, Side-Channel Analysis and Countermeasures, Fault-Injection Attacks and Countermeasures, Efficient Implementation of Cryptographic Primitives and Applied Cryptography.

Amir Moradi is a Principle Investigator (PI) in the Cluster of Excellence CASA "Cyber Security in the Age of Large-Scale Adversaries" since 2019. He studied Computer Engineering in Tehran, where he received his PhD from Sharif University of Technology in 2008. In 2009, he joined RUB as a postdoctoral researcher in embedded security, where he completed his habilitation in 2015. In April 2021, he started an adjunct professorship at RUB; in October of the same year, he accepted an offer for an professorship at the University of Cologne. Amir Moradi's publications have been honored with numerous best paper awards. In 2021, he set a record at the prestigious Conference on Cryptographic Hardware and Embedded Systems (CHES): He was involved in ten of the papers accepted there. In 2022, he contributed to eight papers.

In November 2022, he won the German IT Security Award, endowed with 100,000 euros, together with David Knichel, Nicolai Müller and Pascal Sasdrich for the project "Simply Secure" he talks about in his Inaugural Lecture.

Where? Open Space on the first floor of the MC building

Implementing cryptographic functions securely in the presence of physical adversaries is still a challenge although a lion’s share of research in the physical security domain has been put in development of countermeasures. Among several protection schemes, masking has absorbed the most attention of researchers in both academic and industrial communities. This is due to its theoretical foundation allowing to provide proofs, and model the achieved security level. In return, masking schemes are difficult to realize as the implementation process often is manual, complex, and error-prone, and requires a high level of expertise. This motivated the need for tools that allow the designers and engineers to evaluate as well as generate masked (protected) implementations through an automated fashion.
In this talk, in addition to the basics of hardware masking, a set of tools are presented, which supports developers in the process of designing secure hardware circuits. The toolbox enables (1) fully automated protection of insecure circuits against side-channel analysis attacks and (2) efficient verification of their SCA resistance. As a result, circuits dealing with sensitive data can be reliably protected against such implementation attacks even by inexperienced engineers and developers.

We look forward to a high participation and kindly ask for registration: https://informatik.rub.de/news/antrittsvorlesung-moradi/