At the end of a successful year, we're heading off for the Christmas break. 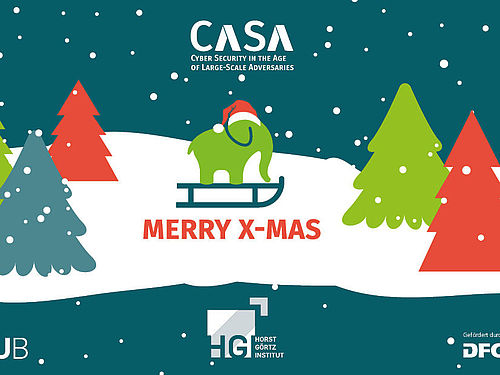 The Christmas season starts soon. The HGI and CASA Head Office Team wishes a Merry Christmas to you and your family. May your life be filled with warmth and good cheer this holiday season and throughout the New Year.

Political and social events turned 2022 into a special year in many ways. When it comes to cyber security research, the HGI and CASA can also look back on several eventful months. Read our review of the year here:

It was probably one of the greatest successes in the history of IT security research in Bochum that we celebrated in July when the National Institute of Standards and Technology (NIST) announced the winners of the "Post-Quantum Cryptography Standardization" competition: CASA scientists Eike Kiltz, Peter Schwabe, Tanja Lange, and Dan Bernstein were involved in three of the four final algorithms.

Speaking of winners: this year's German IT Security Award was held at the Ruhr-Universität in November. The first prize went to the scientists David Knichel, Amir Moradi, Nicolai Müller, and Pascal Sasdrich for their project "Simply secure: A toolbox for automated creation of protected hardware". They won 100,000 euros in prize money.

A new research project launched in 2022 is "Digital Fitness for Citizens - Realistic Risk Perception, Safe Routines," or DigiFit for short, coordinated by Prof. Dr. Angela Sasse. The project is funded by the German Federal Ministry of Education and Research for three years with around 2 million euros.

The Cyber Security Research Team in Bochum is constantly growing, in 2022 we welcomed some new colleagues. Michael Walter holds the professorship for quantum information, Amir Moradi came back from Cologne to Bochum as a professor for implementation security. By December, Karola Marky joined us as a professor for "Digital Sovereignty". The news that Thorsten Holz joins the CISPA Helmholtz Center for Information Security as tenured faculty is a great pity, but we look forward to the future collegial collaboration.

After the long Corona break, we especially enjoyed the events this year that could take place face-to-face again. A detailed report on the CASA Summer School on Blockchain Security and the CASA Retreat in Königswinter can be found on our news pages.

Some of our CASA Distinguished Lectures also took place on-site at Ruhr University again. The lectures of the high-ranking speakers can all be watched on our Youtube channel.

A special evening was the closing event of the artist residency of the media artist Marco Barotti, who presented his concept APES. His sound sculptures made of recycled Wi-Fi sector antennas were created in collaboration with our researchers in 2022. Many have also a lot of positive memories when it comes to the visit of the Minister of Culture and Science, Isabel Pfeiffer-Poensgen, as part of her research trip "#Möglichmacher".

The first CASA comic entitled "What's the Fuzz About Hub C and the Missing Carrots?" also offers another, artistic approach to learning more about the science at CASA. Those who prefer to listen rather than read may have enjoyed our 2022 podcast series, "Nachgehackt - the Podcast on IT Security."

Last but not least, at the end of the year, we’re happily looking back on our series "Women in IT Security", in which we presented exciting female scientists from our institute month by month.

Preview for the coming year

With all these memorable moments in mind, we’re now leaving our office for a winter break until 09.01.2023.

New, joyful events will be coming up in 2023. On this occasion, we can already announce a few dates. On February 10, the Graduate School SecHuman invites you to the annual symposium. A farewell party for Thorsten Holz is dated for March 9. On April 20, we will host the opening of the IT art project "DIS/PLAY" by artist Ralf Baecker. The HGI will celebrate its 20th birthday on May 10, which we will invite shortly. Further dates will be announced in January.