Cluster of Excellence CASA launches a science comic series and takes readers on a fascinating journey to the secrets of secure systems. 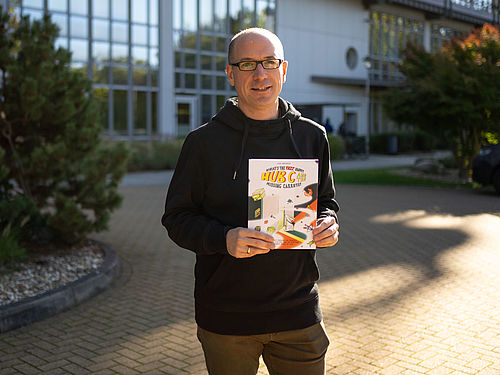 The rabbits in CASA Universe are startled: the seemingly well-secured access to Rabbit Mark's carrot stash has been hacked and all winter supplies have been stolen. The brave bunny Betty then starts looking for support at the nearby CASA Hub C – a mysterious place that is supposed to hold solutions for digital security.

Thus begins the adventure of Betty the bunny, the protagonist of the first science comic from the Cluster of Excellence CASA. Along with Betty, the readers explore the Research Hub and learn about the research priorities and challenges that the scientists in the Research Hub C “Secure Systems“ deal with on a daily basis. They learn which systems contain vulnerabilities, how these can be detected, and which defense mechanisms are being researched. In the course of the comic, numerous researchers present their research projects to the readers, such as the security of software systems, fuzzing, adversarial examples and deep fakes. The comic is complemented by real-life stories and a CASA Wiki that explains technical terms in more detail.

“What's the Fuzz About Hub C and the Missing Carrots?“ is the first comic in the series, which will introduce all of the Cluster's Research Hubs and their research projects in an extraordinary way. “With this comic series, we hope to present the research of the cluster to a broader audience and to arouse interest in the topic of IT security,“ says Thorsten Holz, one of the contributors to this comic. The comics will be published in English and require an initial, prior technical knowledge. They will be made available to interested readers both digitally and as print editions.

Have a look at the Comic