Media artist Marco Barotti's solo exhibition featured the artwork APES, created as part of the art-science residency of the CASA Cluster of Excellence, and explored the meaning of rituals in the digital world. 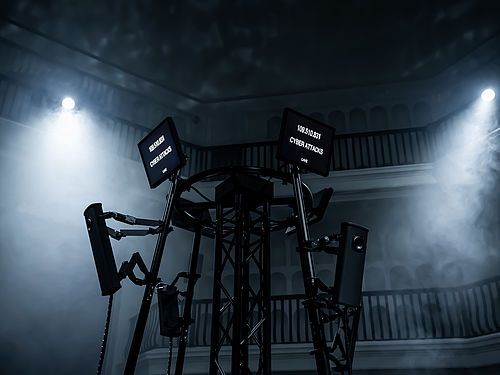 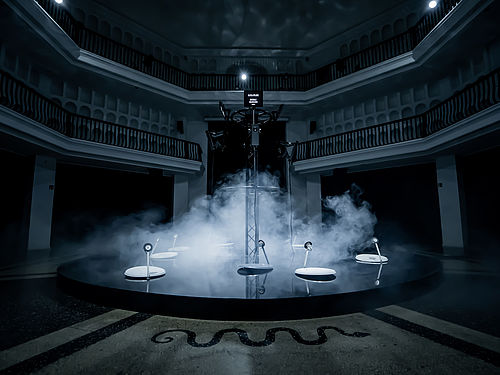 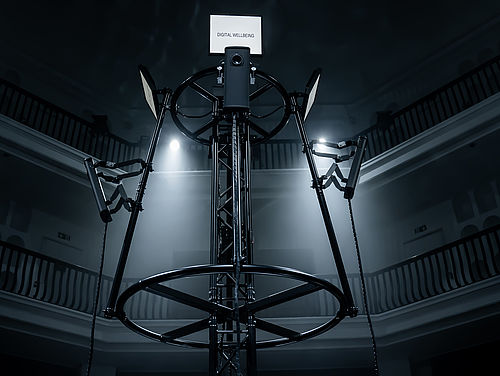 From January 11 to 15, 2023, the artwork APES created by Marco Barotti was exhibited in his solo exhibition "Rituals of Wasted Technology" at the Kulturquartier Silent Green in Berlin-Wedding. The exhibition took place as part of the Speaking to Ancestors exhibition series curated by Pauline Doutreluingne and Keumhwa Kim. The two-year program series invites the participating artists to redevelop their artistic works site-specifically in an engagement with the history of their respective exhibition site. For Marco Barotti's exhibition, therefore, the work APES was united with another of his works - SWANS.

About the Artworks APES and SWANS
The artwork APES are kinetic sound sculptures created in the context of the art-science residency RE:SEARCHING IT SECURITY together with researchers from the Cluster of Excellence CASA and the Horst Görtz Institute for IT Security. Primates were created from recycled Wi-Fi sector antennas, attached to a 2 ½ meter high tower of trusses and controlled by algorithms. Screens above their heads depict ever-increasing numbers of data consumption (e.g., from Google searches, emails sent, and tweets) and cybersecurity events, as well as pauses from data consumption and utilization ("digital wellbeing"). Based on the idea of surveillance capitalism and data consumption, the monkeys were programmed to move according to patterns (quasi-rituals) determined by these same numbers.

On the potential of this collaboration between art and IT security research in the project, participant and CASA Principal Investigator (PI) Asia Biega reflected:

"Art and science have a lot to offer each other. An artistic lens helps us conceptualize new realities and futures, while research on the impacts of digital technology allows art to viscerally convey harms that users might be subjected to."

The SWANS, in turn, were created from former satellite dishes and speakers. Two sound sources, a bass frequency and human breath flowing through brass instruments, give them their voice and set them in motion on the associated pond.

Art Viewing as an Experience for the Senses
In the domed hall of the former crematorium, visitors were greeted by a symbiosis of both artworks, created especially for the occasion and appealing to different senses. The expansive artwork was the focal point of the otherwise dark rotunda. From a black, artificial pond with eight white swans, the tower seemed to grow out, to which the four primates of the artwork APES were anchored. While in the lower part of the room, in particular, the glowing swans from former satellite dishes and the skyrocketing numbers of cyberattacks, Google searches, tweets, and Instagram uploads on the screens above the monkeys' heads stood out in the darkness, reflections of the water appeared on the ceiling and the walls covered with the urn niches. The visual impressions were accompanied by a special soundscape: The howling of the monkey-like sound sculptures that rattled the tower of trusses was complemented by the "swan song." This was accompanied by rippling water as the swans moved across the dark pond.

Many visitors of different ages took the opportunity to immerse themselves for a moment in the special atmosphere and mystical mood of the exhibition at this place of remembrance and to let the works of art take effect on them.

Rituals as a Discussion Topic of the Roundtable
A special highlight of the exhibition's program was also the roundtable on January 14, which explored in greater detail the theme of rituals described in the exhibition's title. In addition to a talk by Professor Dorothea von Hantelmann on exhibitions as rituals and an artistic performance by Johannes Paul Raether as the witchy creature "Protectorama," CASA PI Asia Biega from the Max Planck Institute for Security and Privacy shed light on her research topic "Digital Wellbeing," with a special focus on the responsible use of data in digital space and related rituals. The event was concluded by a panel of the speakers as well as the curators and artist Marco Barotti.

Inspired, Asia Biega looks back on the exchange during the roundtable:

"Spaces of dialogue between artists and researchers from different disciplines allow us not only to experience the artwork but also to see it more multidimensionally, rather than through templates limited by our own expertise and experiences."

More information and photos about the artwork can be found here.