From January 11 to 15, 2023, the artwork created as part of the art-science residency RE:SEARCHING IT SECURITY will be exhibited in Marco Barotti's solo exhibition "Rituals of Wasted Technology" in the Kuppelhalle of the event venue Silent Green in Berlin. 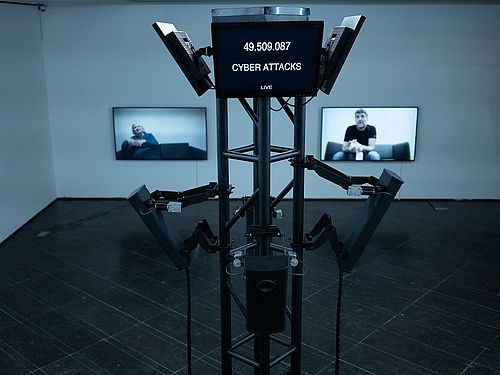 With the aim of providing a new and unusual view onto IT security, an art-science residency took place at the Cluster of Excellence CASA from fall 2021 to summer 2022. Over a period of many weeks, researchers from the Cluster of Excellence CASA, the Horst Görtz Institute for IT Security and the Max Planck Institute for Security and Privacy met with media artist Marco Barotti and discussed research topics and visions for the future. The collaboration resulted in the artwork APES, which went on tour to international art festivals after the project's completion. The next stage of the artwork is now the exhibition "Rituals of Wasted Technology", from January 11 to 15, in Berlin.

Artistic Work of Marco Barotti
Technological products such as televisions, PCs, smartphones and antennas are regularly replaced by better, faster and smarter successors. They are produced, consumed and end up in landfills. Artist Marco Barotti breaks this cycle by giving old satellite dishes and recycled Wi-Fi antennas a new life. His kinetic sculptures create "engineered ecosystems" that approximate the behavior and aesthetics of real animals and plants. Barotti creates post-apocalyptic landscapes in which the animal world exists as an electronic replica, as described by Philip K. Dick in his 1969 book "Do Androids Dream of Electric Sheep?"

Symbiosis of Two Works of Art
"Rituals of Wasted Technology" is Barotti's first solo exhibition in Berlin. In the Kuppelhalle of the former crematorium Silent Green he presents a expansive sound installation consisting of APES & SWANS. Both species relate symbiotically to each other:

On January 14, 2022, "Rituals of Wasted Technology" will feature talks by Johannes Paul Raether, Asia J. Biega, and Dorothea von Hantelmann, followed by a roundtable with artist Marco Barotti and curators Pauline Doutreluingne and Keumhwa Kim, starting at 4 p.m. They will address the question of how technologies affect rituals of our everyday life and how they influence artistic exhibition practices.

Speaking to Ancestors Exhibition Series
The exhibition "Rituals of Wasted Technology" by Marco Barotti takes place within the exhibition series "Speaking to Ancestors" curated by the two curators Pauline Doutreluingne and Keumhwa Kim. The two-year program series forms a narrative of seven successive artistic positions, whose works deal with the search for genealogies and ritual (image) practices that create a new performative space of action between faded myths and handed-down imagination. The program is created in cooperation with different places in Berlin that function as "memory spaces"; as places of worship, places of healing or places of devotion. In engagement with the history of the exhibition site, the artists* are invited to develop their work site-specifically.

Venue: Silent Green
The exhibition will take place in the domed hall of Berlin's Silent Green. The former crematorium in Wedding is a listed building. It was built between 1909 and 1910 and was the first crematorium in Berlin. Its presence testifies to the changing cultural norms of dealing with death in modernized early 20th century Germany, where cremation became an alternative to burial in the ground.

More Information about the Art-Science Residency RE:SEARCHING IT SECURITY